A Chinese man has been reunited with his son after a 24-year search that saw him travel more than half-a-million kilometres around the country on a motorbike.
Guo Gangtang’s son was snatched by human traffickers in front of their home in east China’s Shandong province when he was two years old.
Mr Guo, a 51-year-old farmer, spent his life savings searching, becoming a prominent member of missing-persons organisations in China and helping at least seven other parents reunite with their abducted kids.
His story has long tugged at the heart of the nation, with his determined efforts to find his son even being made into a movie six years ago.
However, a happy new chapter was added on Sunday as Mr Guo’s son, Guo Xinzhen, who had been trafficked to the neighbouring Henan Province in 1997, was reunited with his family in Shandong’s Liaocheng City.The moment was widely shared online with people across the country sending warm messages and offering congratulations to the family. On Tuesday, the Ministry of Public Security held a press briefing that revealed some details into how the case was cracked using DNA tracing.
Ministry of Public Security criminal investigation bureau deputy director Tong Bishan said DNA samples were collected from people in Henan after “clues” narrowed down the search.
According to the ministry, a man and a woman in Shanxi province had been arrested over the original abduction.
Back in September 1997, the two-year-old Xinzhen was abducted by an unknown woman when he was playing near his home.
More than 500 people volunteered to search for the boy in nearby bus and train stations, but no clues were found.
However, Mr Guo never gave up hope.
He magnified his son’s photo and had it printed on a flag with the message, “Where are you, my son? Daddy will take you home”, before embarking on a tireless search across the world’s most populous nation.
“I thought maybe there is a ray of hope to find my son if I go out searching for him,” he told China Central Television (CCTV) in 2015.
“The kidnapper would never send my son back anyway. If I stayed at home, there is no chance. So, since the end of 1997, I began the search for my son.” 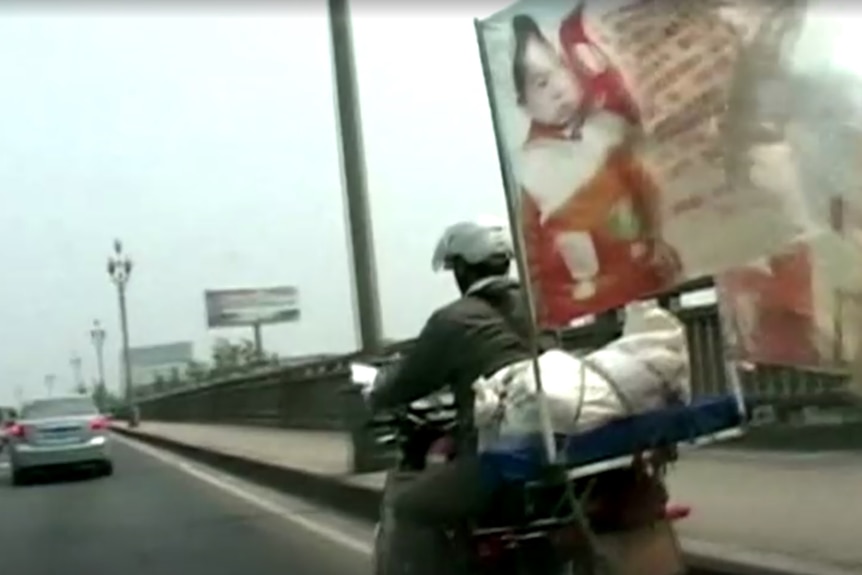 Mr Guo left his footprints in almost every part of the country as he embarked on a mammoth cross-country search, distributing fliers from his motorbike.
He even learned to use the Internet to hunt for more clues, and printed tens of thousands of letters to seek help from relatives, friends, volunteers and police across China.
While looking for his own son amid the murky world of human trafficking, Mr Guo was able to find a number of other lost children for several other families, and carried around a collection of missing-person notices.
The moving story was adapted into a full-length motion picture, titled Lost and Love, which premiered in 2015 and starred renowned Chinese actor Andy Lau playing the leading role.
Upon hearing the good news of the family reunion, Lau posted a special congratulatory message online on Monday, and called for more concerted efforts to combat the issue of child trafficking.
“I met Mr Guo because of the film Lost and Love,” he said.
“Today, I feel very happy and very excited, because Guo’s abducted son was finally reunited with his parents after 24 years, thanks to the efforts of public security organs.”
He said he admired Mr Guo’s persistence.
A number of film crew members who worked on the movie also sent their congratulations, while some said on social media they would like to see a sequel that features this happy ending.
The Ministry of Public Security said Chinese police had located and rescued 2,609 missing or abducted children, including adults who had gone missing or were kidnapped as children, since a nationwide campaign was launched in January.
Police had solved 147 cold cases involving child abduction and trafficking during the period, and arrested a total of 372 suspects linked to such crimes.
One victim was traced after a span of 61 years, the ministry said.